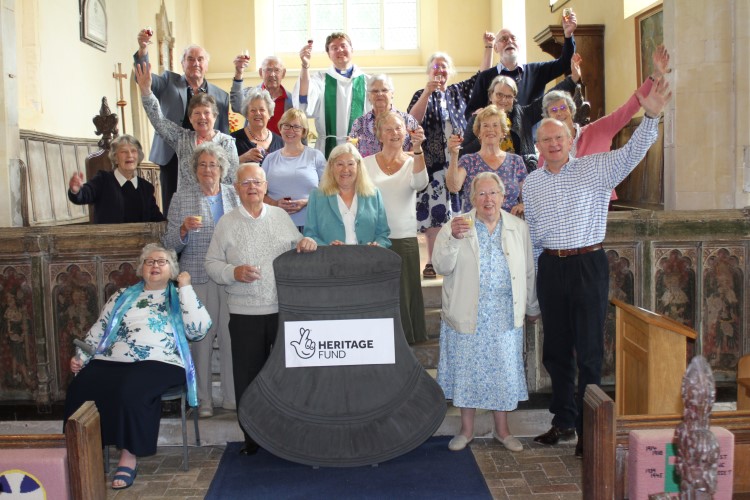 Thanks to funding received from the National Lottery Heritage Fund, the Reverend Professor John Stevens Henslow’s work will finally be recorded in a permanent exhibition in Hitcham church where he was once rector.

Henslow is of regional, national and international importance and yet his work is hardly known. Charles Darwin’s tutor and mentor, a ground breaking professor of botany at Cambridge and founder of Ipswich Museum. Henslow was also a champion of the poor with a strong belief in the powers of education.

The Friends of All Saints Church Hitcham have received a £100k grant from the National Lottery Heritage Fund for the project ‘Restoring Henslow’s Bells’ which will include the exhibition.

‘Hitcham Church has a very rare but unusable C16th bell frame which is unique in East Anglia, if not England so needs to be preserved. This turned a £50K bell restoration plan into a major project costing over £200K,’ explained Nicola Currie, secretary to the Friends. ‘A new bell frame has to be inserted under the existing one in the existing ringing floor, so a new ringing floor also has to be built. We decided to extend the project to include a permanent exhibition on Henslow, our most influential rector so that visitors to the church get to share in this important man’s achievements. To make sure that even more people get to hear about all that Henslow did, we have teamed up with The Museum of East Anglian Life. They will be staging a yearlong major Henslow exhibition in 2020.

‘It has been 100 years since Hitcham’s bells were last rung full peal, there have been serval attempts to raise the money in the past but other more urgent repair work always took precedence.  We finally raised half the money but Hitcham is a small village and without the help of the National Lottery Heritage Fund we could not have achieved our goal. We would like to say a huge ‘Thank you’ to everyone who plays the Lottery and has helped to make this work possible. ’

Darwin described meeting Henslow as the one circumstance ‘which influenced my career more than any other’.

Jenny Cousins, director of the Museum of East Anglian Life said, ‘We’re delighted to be working with the Hitcham team to help share the inspirational legacy of Henslow at the museum.’

Henslow was rector of Hitcham from 1837-1861. He commissioned two of Hitcham’s bells to mark Queen Victoria’s coronation. A man of many talents, he corresponded with Prince Albert and taught the royal children but placed equal importance on teaching Botany in Hitcham School, enabling some of the children to collect specimens for Darwin’s research. Henslow is buried in a simple grave in Hitcham church yard.