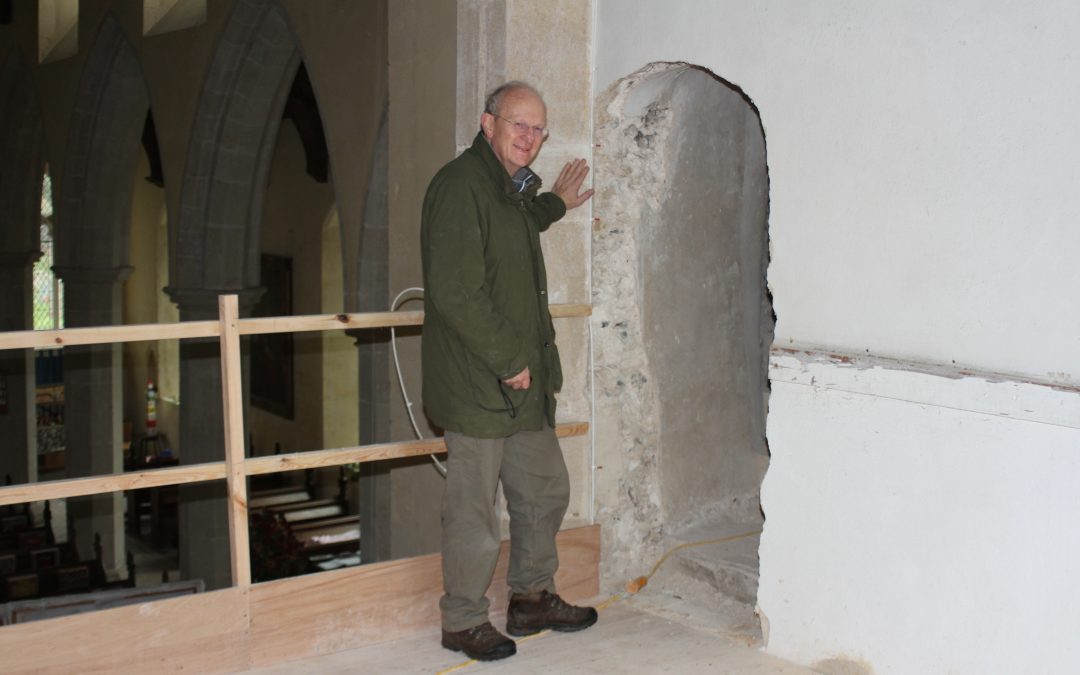 A doorway in the church tower at All Saints Church, Hitcham, has been reopened after 149 years. The work has been part of a major restoration project to restore the bells. The door was bricked up in 1871 when the musicians’ gallery in the church tower become unsafe and was taken down. Before there was an organ in the church, villagers used to play whatever musical instruments they had for hymns and psalms, usually violins. Hitcham is a large church with a massive tower, so to help the sound fill the building better the players used the gallery.

When local builders, Cubitt Theobald Ltd, started to remove the bricks and rubble it became clear that not only was the plasterwork intact but that there was writing on both sides of the door archway. Four names had been written in pencil along with the name of the then rector Rev A R Grant. They are: George Fisher, George Death, Daniel Dickerson and John Carnall.

Even more tantalising is the ringing sequence or ‘method’ found pencilled on the other side of the door archway.

‘It is a set of numbers from 1-6 denoting the order in which each bell is rung, the equivalent of a musical score for bells. Ringers had to learn this by heart. Hitcham’s bell ringers must have been highly skilled to ring it, impressive when you think how impoverished the village was in the 1800s,’ added Mr Currie.

‘Finding the ringing method means the gallery must have also been used as a ringing floor, something we did not know before. This is very exciting as it means it was being used this way when the Rev. Prof. John Stevens Henslow was our Rector, as he only died in 1861.’

Henslow, who was Charles Darwin’s tutor and mentor, did a great deal to ensure all the parish children received a good education to help them overcome poverty. Perhaps that is why the ringers were so skilful. Either way, the new information fits very well into our National Lottery Heritage Fund restoration project called ‘Restoring Henslow’s Bells’, which is reinstating the gallery as a new ringing floor as part of restoring the bells on a new metal frame. (The old one has been unsafe for full circle ringing for 100 years.)

Thanks to a generous private donor the church’s very rare, wooden original bell frame has been dendro dated as part of the project.  Dendrochronology is the scientific method of dating tree rings to the years in which they were formed. The results show that the timber felling dates for Hitcham’s bell frame are 1520-29. This fits with some documentary evidence:

Dr William Cooke, Rector of Hitcham, in his will of 1522, gave 40 shillings ‘towards a litill bell to hang in the stepull of Hecham so the township will b[u]y it within the space of a yere after my departure’.

Now science has proved that the villagers did indeed raise the money to build the frame and install the bells.

The village asked the East Anglian Daily Times and went on to BBC Radio Suffolk to ask for help in identifying the ringing method. Replies came back from as far away as Scotland, Bath and London – but better still, four miles down the road at Buxhall, the band there reported that they ring the method called ‘Double Court Bob Minor’ regularly, and would be happy have it recorded so Hitcham can hear what Henslow was hearing all those years ago.